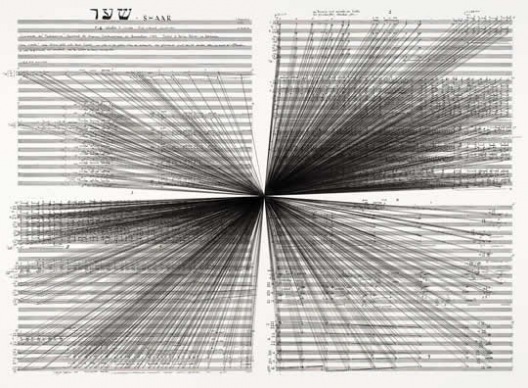 To make these drawings Fusinato chose a point on the page and then ruled a line from every note in the composition back to that point. This ongoing series, initiated in 2007, is founded—literally overlaid—on the scores of pioneering avant-garde composers. In the works on view here, Fusinato has drawn on a score penned by the Greek composer Iannis Xenakis (1922–2001), whose groundbreaking post–World War II works were deeply informed by mathematical and architectural logic, and, later, by computer programming. Xenakis worked for more than a decade in the studio of the architect Le Corbusier, and he often composed with an existing architectural site in mind. Here Fusinato has used Xenakis's score in the same way—as a pre-existing space.This drawing and others in the artist's Mass Black Implosion series have an immense gravitational density, which seems to suggest that all the notes should be played at once. Fusinato's intervention thus shifts the scores away from Xenakis's original intention, collapsing linear/durational performance into simultaneity.