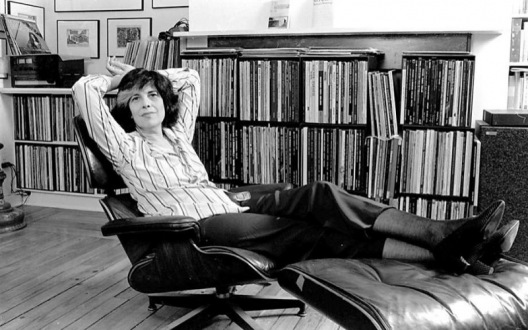 Our privacy was in cars. Merrill had a real driver’s license, while mine was the “junior” license one could hold from fourteen to sixteen in California then, entitling me to drive my parents’ cars only. Since parents’ cars were the only ones available to us, the difference was moot. In his parents’ blue Chevy or my mother’s green Pontiac we perched at night on the rim of Mulholland Drive, the great plain of twinkling lights below like an endless airport, oblivious of the mating couples in cars parked around us, pursuing our own pleasures. We pitched themes at each other in our inexact treble voices—“O.K., listen. Now, what’s this?” We quizzed each other’s memory of Köchel listings, knowing by heart long stretches of the six hundred and twenty-six. We debated the merits of the Busch and the Budapest Quartets (I’d become an intolerant partisan of the Budapest); discussed whether it would be immoral, given what I’d heard from Elaine and Mel about Gieseking’s Nazi past, to buy his Debussy recordings; tried to convince ourselves that we had liked the pieces played on the prepared piano by John Cage at last Monday’s “Evenings on the Roof” concert; and talked about how many years to give Stravinsky.

This last was one of our recurrent problems. Toward John Cage’s squawks and thumps we were deferential—we knew we were supposed to appreciate ugly music; and we listened devoutly to the Toch, the Krenek, the Hindemith, the Webern, the Schoenberg, whatever (we had enormous appetites and strong stomachs). But it was Stravinsky’s music we sincerely loved. And since Stravinsky seemed grotesquely old (we had actually seen him on two Mondays in the small auditorium of the Wilshire Ebell, when Ingolf Dahl was conducting something of his), our fears for his life had given rise to a compelling fantasy à deux about dying for our idol. The question, a question we discussed often, was: what were the terms of the sacrifice we so relished contemplating? How many more years of life for Stravinsky would justify our dying now, on the spot?

Twenty years? Obviously. But that was easy and, we agreed, too good to hope for. Twenty years, granted to the ancient homely person we saw Stravinsky to be—that was simply an unimaginably large number of years to the fourteen-year-old I was and the sixteen-year-old Merrill was in 1947. (How lovely that I.S. lived even longer than this.) To insist on getting Stravinsky twenty more years in exchange for our lives hardly seemed to show our fervor.

Five? We began to waver But not to agree seemed like a failure of respect, of love. What was my life or Merrill’s—not just our paltry California-high-school students’ lives but the useful, achievement-strewn lives we thought were awaiting us—compared to making it possible for the world to enjoy five years more of Stravinsky’s creations? Five years, O.K.

Three? To die for only three additional years?

Usually we settled on four—a minimum of four. Yes, to give Stravinsky four more years either one of us was prepared right then and there to die.